Hi Guys. Did you survive your solar eclipse day… lol? I know you have your story to tell. So many people were doing different things, and had different kinds of reactions to their experience… or lack of. It’s hard to believe it was just yesterday. Well, except for all of the traffic trying to head home.

A few months back, ads and news reports were saying there was coming a solar eclipse. Later people were panicking because the special glasses were running out of supply. People were making lavish plans in areas for 100% total eclipse… meaning the moon would cover the entire sun with an outer glow perfectly encircling the moon. This could make one go blind or have permanent eye damage. Scientist were saying cameras weren’t safe. It would destroy them. There were ways to view… i.e. welding glasses, etc.

My son asked me, “If that time is so dangerous it can kill camera lenses, is it safe for us to be out there even with protective glasses?” We watched from the porch (away from the sun). My brother let his security cameras record. When I told him of the warning, he simply replied, “I’ve got spares.” He wasn’t missing footage… lol. This is one of his pics. 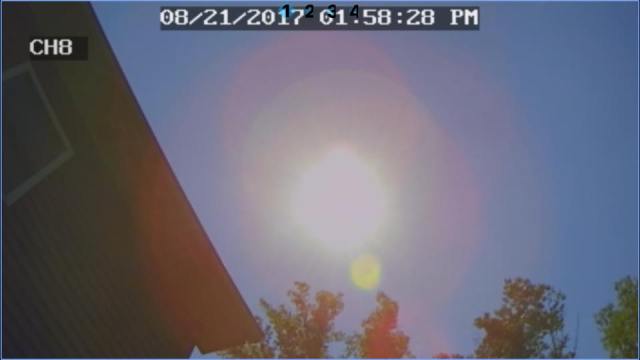 As time drew near, we began watching NASA footage online. My son went to make it reflect to the ground. It worked enough to be exciting to cast something happening in the skies to the ground, but it was a white dot on cardboard. Just as the eclipse was drawing near its end, our neighbor drove in. He pulled out his old welding helmet. He offered us each a turn to look. It was such a difference!

Before putting on the helmet, the sky had a hue as if dusk was setting in. Even the crickets were singing loudly. After putting on the helmet and looking up, everything was black except the sun ring around the moon! How incredible was that! It was so brief, but it was like God saying, “Here. Have a peek at my wonders. It is pretty amazing!”

This was extra meaningful to me as I asked God earlier that morning (4:30am) if there was a friend we had to look into His sky… with a telescope. I get amazed at God’s beauty. It was dark, but I could easily see God! And God being His personal loving self,  answered a prayer in a way I would have never expected. Thank you, Neighbor! God bless you!

Soon it was all over. People in many places were upset because of cloud coverage, or simply let down from what they were expecting. Personally, I think science makes it out bigger than what it is to get people’s attention, but end up disappointing them far worse. So that’s my 2017 Solar Experience (later dubbed on the news as the Great American Solar Eclipse). My stepdad slept through the whole thing. What’s yours?

This site uses Akismet to reduce spam. Learn how your comment data is processed.